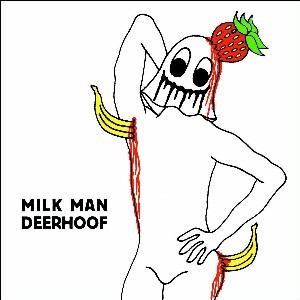 There is no doubting that interest in Deerhoof has reached new levels... full tents at festivals, larger venues – it only seems a snip of time since I caught them in a tiny Manchester shell – and a curious omnipresence on fringe radio. And all this, it seems, while the band reside individually in Tokyo, Wisconson, Oregon and New York. Separated by distance, united by technology.

Such attention naturally swells interest in a back catalogue that stretches back an astonishing 16 years and, in its own jagged and barbed way, appears to touch and tease most identifiable genres - and quite a few that have yet to be confidently pinned down. Although it is arguable (and aficionados of this band are certainly prone to arguing) it is their 2004 outing Milk Man that continues to attract the most attention. Not necessarily because it is their finest (argue away... go on) but because it is unquestionably the recording that saw the band retreat to 'bunker mentality' and sink back into a comfort zone which might seem to be anything other than comfortable.