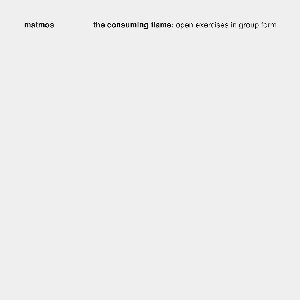 Matmos have a playful nature often lacking in electronic composition, bristling with a palpable sense of wide-eyed discovery undiluted across their 25 years as a band. M.C. Schmidt and Drew Daniel are long-known for their practice of unusual sampling and experimenting with conceptual restrictions.  ‘The Consuming Flame: Open Exercises In Group Form’ is both a tongue-in-cheek rebuttal to the backlash against ‘conceptronica’ and their most ambitious project to date. The record is oriented around a deceptively simple commitment. 99 different musicians were asked to contribute: they could play anything that they wanted but the tempo of any rhythmic material had to be set at 99 beats per minute. The resulting album is a three-hour long assemblage that’s a kaleidoscope of genre, mood and density, while all synchronized to a constant underlying tempo. There’s a relentless forward-motion keeping more with traditions of pirate radio and mixtapes than the traditional album format.

Adepts
Maybeism
Garden Of Tall Boys
Dancing Your Animal
Nice Men In Stable Relationships
Let Us In
Io! Lavendar River Karez
The Void At The Center
I Know What I Saw
Sarabande
The Dead City Of Telphar
Platformalism
Verminiatures
Reciprocal Realms
Unmastering
I’m On The Team

MatmosThe Rose Has Teeth In The Mouth Of A Beast