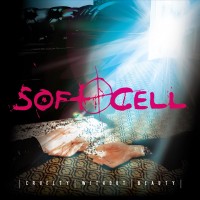 Soft Cell’s 2002 reunion album ‘Cruelty Without Beauty’ is set for reissue in new expanded and remastered 2CD format, as well as being released on vinyl for the very first time.

Long regarded by many fans as an overlooked masterpiece, the album features a lyrical outlook that was as true to Soft Cell’s maturity and perspective back in 2002 as it is relevant and accurate to the world situation in 2020. Harshly honest, fatalistic and bleakly humorous, Cruelty Without Beauty also preserves the band’s highly distinctive and edgy sound, and stands alongside their greatest work.

Cruelty Without Beauty, Soft Cell’s fourth studio album, and the first since their original split in 1984, happened after Marc Almond and Dave Ball reunited in the studio after Dave’s ‘other’ band The Grid (with Richard Norris). They worked with Marc on some tracks from his 1991 Tenement Symphony album, which eventually opened the door for some live Soft Cell dates and a reunion in 2001. As well as this album release in 2002, the band toured the album extensively in the UK, and across Europe and the US, including many festival appearances throughout 2002 and 2003.

The album includes the singles Monoculture and a cover of Frankie Valli & The Four Season’s classic The Night, which became the band’s first Top 40 hit since since 1984.

Most recently in 2018, Soft Cell sold out London’s O2 Arena and were the subject of a career retrospective BBC documentary. They have recently signed to BMG and are currently recording a brand-new album, set for release in 2021. Before then, all of their classic Phonogram-era albums will be reissued in new expanded editions via Universal Music.

Marc Almond commented at the time of the album release ‘I always felt it was an unfinished story, and I’m glad we’re able to write another chapter’.

Dave Ball also commented ‘As soon as we work together, we become Soft Cell, you know’. I don’t know what the magic element is, but it just seems to be there’.