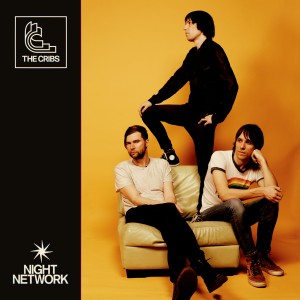 Order the album for a chance to win Ryan Jarman’s Signature Fender Squier guitar (the last of its kind) .

From Ryan: “Found the last Musuar Fender in existence the other day whilst going through my storage unit. It was supposed to be my personal ‘final production’ model (as I only have the prototypes at the minute) but looks like one of you guys are gonna end up with it instead! Still all boxed up like the day I received it. If you want it, better get on it. Only 250 were ever made and this is the one that was set aside for me personally. Which makes it cooler, obviously. It even still has my name and shipping address on the box, but that might be scribbled out by the time you receive it!”


Having released their Steve Albini engineered album, 24-7 Rock Star Shit – their fourth consecutive UK top 10 album- in August 2017 the multiple Q and NME Award winning band almost immediately parted company with their long time UK management and found themselves stuck in what Gary describes as a “legal morass”, unable to record or release new music, so touring wasn’t an option either. That meant 18 months of fallow – heart-breaking stuff for a band who’ve known nothing else in their adult lives. “At one point we were actually so disillusioned with what had happened, we didn't even know if we wanted to get back into the band anymore,” says Ryan.

Fast forward 3 years and Night Network is as fresh, cathartic and vital as anything they’ve ever put out. There’s no weariness, no bitterness, just a clear desire to get back to doing what they do best – that unique blend of bittersweet melody, brutal lyrical honesty and riffs for days.

The turning point came at the 11th hour, in the late summer of 2018. The Cribs had been invited to support Foo Fighters at Manchester's Etihad Stadium, in what could very well have been the band's last hurrah. Enter the brothers’ knight in shining armour, and childhood hero, Dave Grohl. Hanging out backstage, chatting over a few post-show drinks, The Cribs confided their recent struggles to their new friend. “Dave was just like, ‘Forget about all that business stuff, just come out to LA and make a record at our studio’ – Dave made that offer to us,” Ryan recalls

The three brothers are now scattered over nearly 5,000 miles, with Gary in Portland, Oregon, Ryan in Queens, New York and Ross in Wakefield, West Yorkshire. When they gathered in the UK for a family Christmas in December 2018, they began working on songs in Ross’s garage, and found the creative juices flowing.

The songs came together fast, and when they finally contacted the Foo Fighters and said they’d be keen to take them up on the offer, they were offered a window of studio time in April 2019 – a fixed date to work towards, and the impetus for a final push to sort out the miasma of business mess.

Their new found autonomy extended to the recording process itself – this is the first album to be entirely self-produced by the band. Engineered by James Brown (Foo Fighters, Arctic Monkeys) and mixed by frequent Cribs collaborator John O'Mahony (who also worked on 'Men's Needs, Women's Needs, Whatever' and 'For All My Sisters') the record took shape over two weeks in LA, plus an extra week of overdubs at Halfling Studios in Portland. Mercifully, it is not a poor-me album about the ills of the industry. No, they deal with that on the first track, a slice of surf-ready sunshine pop with gorgeous harmonies called 'Goodbye'. “That was our way of saying ‘goodbye’ to that period of our lives. Let's move on,” says Ross.

After that, no indulgence is made to the band’s struggle. Instead, it’s wall-to-wall Cribs bangers, the fruit of that special, symbiotic relationship between the songwriting, singing brothers, drawing on the boiled-down influences they felt had always been there: The Motown stomp of 'Never Thought I'd Feel Again' and 'Under The Bus Station Clock', red and blue album-era Beatles ('Running Into You' and 'In The Neon Night', respectively), melodic 70's style pop on 'Deep Infatuation’, and even early work by their own band.

And they return with a familiar friend, too – Lee Ranaldo, ex-of Sonic Youth, and the man whose spoken word verses on 2007 track 'Be Safe' helped elevate the song to anthem status amongst the bands legendarily devout fanbase. Here, Ranaldo plays guitar on 'I Don’t Know Who I Am' – and Be Safe Part II (Be Safer?) it ain’t. The song started out as a jam in Ross’s garage which the brothers later tracked at 606, before Ranaldo layered sheets of white-noise guitar over the recording at Sonic Youth’s Hoboken studio, and a few backing vocals for good measure.

In a typically downplayed way, the band have honed in on what’s so special about The Cribs: really bloody good songs. Fans might well think this is their best album in a decade. So, once again all is right in Cribs world – or as much as all is right in any world in 2020 at least. The Cribs are romantics and they’re realists, and the balance, for a hot minute, nearly tipped in the favour of the latter. But now they return empowered, beholden to no one, on the greatest form and still screaming in suburbia.

Barry says: The Cribs bring the fire on their latest offering of infection stoned rock hooks and snarling, punk edge. Brimming with hooks and varied enough to keep the momentum, it's definitely their greatest work for quite some time.

The CribsFor All My Sisters