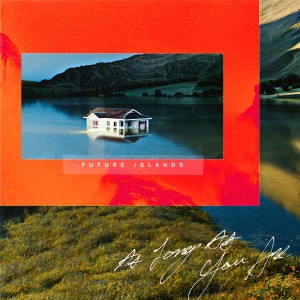 As Long As You Are looks to the past as well as the future, confronting old ghosts and embracing a new hope. It is an album about trust, full of honesty, redemption and “letting go”, allowing old wounds to heal and bringing painful chapters to a close.

As Long As You Are also signals a new era for Future Islands. Drummer Mike Lowry officially joins as a fully-fledged member and songwriter bolstering the founding trio of William Cashion, Samuel T. Herring and Gerrit Welmers. Together, the four-piece took on official production duties for the first time, co-producing As Long As You Are with engineer Steve Wright at his Wrightway Studios in Baltimore. Their brand of new wave synth-pop full of bright melodies and heavenly choruses is as euphoric and uninhibitedly joyful as anything the band has done in their 14-year career.

Barry says: There is something absolutely enthralling about Samuel T. Herring's on-stage dancing. We all know that, but it's with no small amount of joy that I can confirm the quality of the music is indeed up to the same high standards. Longing, wistful and emotive, with electronic synthy sections beautifully offset with the more driven anthemic material. 'As Long As You Are' is a triumph, and quite possibly the best work they've done.