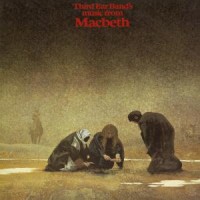 Munster Records bring us "Macbeth", the staggering soundtrack by the English band Third Era Band for a Roman Polanski's film, recorded and produced in 1971. Commissioned by the acclaimed film director Roman Polanski, the English cult band Third Ear Band faced the challenge . The resulting 44 minutes of imaginative sounds, divided in 16 outstanding pieces, is an astonishing example of an archaic, twisted, abstract psychedelia, rooted on medieval and classical textures. . The themes presented on the film were composed in an improvised manner while watching black and white excerpts of the oeuvre. The music, recorded in six weeks at George Martin's Air Studios, in July 1971, has the same unconventional and quite unique dimension as the film itself. It is an auteur music for an auteur film.