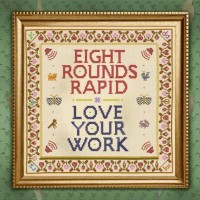 The band's debut album gained excellent reviews from the likes of Uncut, who said, "Edgy, drugged-up thug punk. 'Loss Leader' is Thames Estuary crude given a vital contemporary twist. Invest now". Mojo gave the band a 4-star review and Classic Rock summed the band up: "Thrashing the moody cut-and-shut Mk1 Capri of Essex geezer rock like they stole it. A welcome blast of no-frills, bullshit-free excitement that can only be deadly live". Eight Rounds Rapid supported Wilko Johnson on two major UK Tours, and have had airplay from BBC DJs Mark Radcliffe, Gary Crowley, Gideon Coe and Steve Lamacq.

The band's songs are rooted in traditional rhythm and blues, but impulsive guitar from Simon Johnson (Wilko's son) and acerbic delivery from singer David Alexander make the act sound like John Cooper Clarke and Mark E Smith fighting in a Southend bus depot. The line-up also features Jules Cooper [bass] and Lee Watkins [drums]. Everett True said, "This is great. Art Brut meets ATV, with a touch of the old Wilkos. With a smattering of all those (rather scary) old ruffians: The Inmates, Nine Below Zero, Dr Feelgood. All that crowd".

Recorded under the spectre of a global pandemic, 'Love Your Work' reflects feelings of confusion, angst and isolation - all delivered with singer David Alexander's trademark sneering dry wit. The customary low life and underground subjects are still the only language they know, but this album is as much a commentary on contemporary music confronting modernity as it is a collection of musical compositions. The new album grapples with the folly of nostalgia while singles 'Love Don't', 'Tricks' and 'Eating' ramp up the energy levels. Violent lowlives and losers populate the songs as usual, but David Alexander now draws himself closer into view, with 'Aging Athlete', a metaphor for a musician searching for legitimacy in a dull landscape.

Music as duty. Love your work.