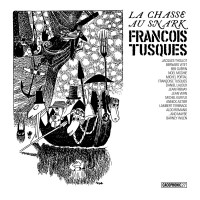 Liberated from the personal vaults of François Tusques himself, the previously unreleased recordings from the ‘La Chasse Au Snark’ (The Hunting Of The Snark) sessions.

“I know for sure side A is a studio recording carried out in august 1968 by the comité action musique, an activist group of artists and engineers aiming to reclaim the means of production from the ‘record industry’. The lineup is me, Vitet, Guérin, Laloux, Frenay, Vern, Astier, Françoise Tusques, no drums (everyone doubling on percussion), and Michel Portal on bass clarinet and saxophone as guest. Side C is a montage of the surviving bits of the happenings that took place at La Vieille Grille between August 1967 - March 1968 (sometimes on a daily basis in ‘68!), the museum of modern art during the May ‘68 demonstrations, and the Biennale Of Paris in February 1969. Sides B and D are less theatre oriented and may have been recorded either at the American center in October 1968, the international students center in November 1968 (Barre Phillips on bass and Barney Wilen on sax guested on these dates but I’m not able to confirm they are on the tapes), or in the winter and spring of 1969. However, the cassette for side B only read ‘Snark 1969’.” - François Tusques

To complete the package Finders Keepers have officially licenced a number of illustrations by none other than Tove Jansson, the creator of Moomin Valley and its magical inhabitants, who was commissioned in 1959 to illustrate a Swedish edition of Lewis Carroll’s miniature masterpiece.