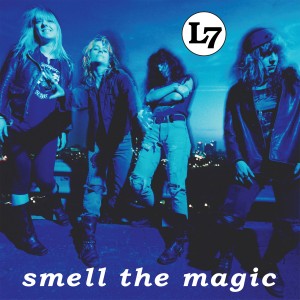 This 30th-anniversary edition of the ‘90s underground rock classic Smell the Magic includes all 9 songs from the album, remastered and available together on vinyl for the first time ever! A multitude of rock music scenes populated the expanse of Los Angeles in 1989: hardcore punk, industrial goth, roots rock, and Sunset Strip hair metal, to name a few. L7 fit into none of them, creating their own unique blend of punk and hard, hooky rock loaded with humor and cultural commentary. Originally released in 1990, Smell the Magic is a a landmark of '90s feminist rock.

Barry says: If you’ve listened to the radio in the last 30 years you can hear all sorts of examples of how much L7 influenced other acts, and this 30th anniversary reboot of their incendiary second album is a remastered gem in the weirdo goth-rock crown.