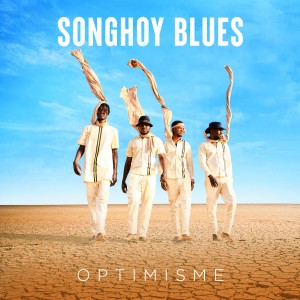 Arguably one of the most successful and exciting bands to emerge from Africa in recent years, they open this set with "Badala", Songhoy for “We Don’t Give a Fuck”. Talking about the track, Aliou from the band said:

When you go out to clubs in Soho, London or New York, you hear hard rock music that can make people move. We wanted to make a rock club crowd get involved with Songhoy Blues. It’s about Songhoy Blues reaching even further than before. We want to see people jumping on a Songhoy Blues track, like they were at a concert. Matt Sweeney said something important the day before we went into the studio. He said ‘We need to make a real Songhoy Blues album. Songhoy Blues stage energy is crazy. Why don’t you put that energy straight in the song?’ That’s what we did.

This 11-song, multilingual album marks a real musical breakthrough. Musically harder, steeped in deep traditions of classic Malian music and desert blues and fused with an urgent and super-charged sound of now, the album was produced by Matt Sweeney of beloved indie rockers Chavez, who’s worked with a host of celebrated artists including Johnny Cash, Run the Jewels, El-P, Cat Power and Will Oldham, and recorded & mixed by Daniel Schlett (The War on Drugs, Modest Mouse, Ghostface Killah) in Brooklyn, NY.