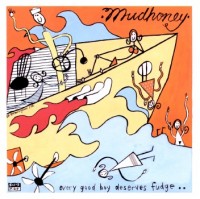 'Whether it was Conrad Uno's production, the addition of more instruments to the Mudhoney arsenal (notably, Mark Arm adds organ, as can be enjoyably heard on "Who You Drivin' Now," among other numbers), a slew of brilliant songs, or a combination of the above, Every Good Boy Deserves Fudge found Mudhoney coming into their own album-wise. "Let It Slide," the album's lead single, fuses everything from surf rock drumming from Dan Peters to a delicious vocal whine on the verses from Arm into a hotwired classic. It's not so much grunge as speed-freak energy, and all the better for it given the caricatures of Sub Pop's sound that would soon take over the airwaves.'