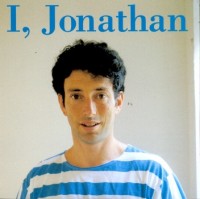 'I, Jonathan' is the fourth solo album by Jonathan Richman, released by the Rounder Records label in 1992. This is the first time it has ever been available on vinyl.

As the founder of influential protopunk band The Modern Lovers, Richman had strived to convey authentic emotions and storytelling with his music. ‘I, Jonathan’ continued this aesthetic with simple and sparse rock and roll arrangements, and straightforward lyrics about mundane topics.

The album helped increase Richman's cultural profile, which would include a 1993 appearance on Late Night with Conan O'Brien in which Richman performed one of the album's songs, "I Was Dancing in the Lesbian Bar".

Parties In The U.S.A.
Tandem Jump
You Can't Talk To The Dude
Velvet Underground
I Was Dancing In The Lesbian Bar
Rooming House On Venice Beach
That Summer Feeling
Grunion Run
A Higher Power
Twilight In Boston