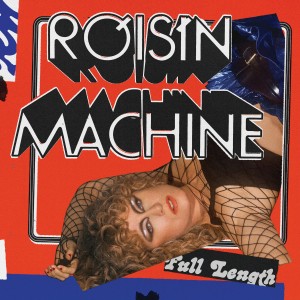 "Róisín Machine" is the culmination of a rich, decades long partnership between Murphy and one of her most trusted collaborators Crooked Man aka DJ Parrot. Although packed to the rafters with masterclass singles, including “Simulation”, “Jealousy”, “Incapable”, Narcissus” and “Murphy’s Law”, it is also an ingeniously and seamlessly edited listening experience, designed to be listened to in one uninterrupted sitting, from start to dazzling finish.

From the intoxicating disco-funk of “Incapable”, to the quintessential “Narcissus” which crystallised New-Disco and established a high watermark for the genre, to “Murphy’s Law”, a 70s inflected stomper, “Roisin Machine” offers up everything you could ask for on an exquisite plate. Added to the familiar tunes are five new songs, including the Dalek-funk of ‘We Got Together’ and the fantastical “Shellfish Mademoiselle”. An album that works perfectly on the home sound system but also comes alive in a basement sweatbox, it impeccably sits alongside Murphy’s stellar cannon of work released across 25 boundary pushing, trailblazing years, a career encompassing iconic music, directorial, art and fashion moments.

Mine says: Róisín Murphy has always had that certain indefinable something; a self-assured demeanour that although grandiose never seems pretentious. Perky and eccentric, but always charming - someone you can look up to in an artistic way but equally just want to take out for a pint and a bit of banter. Add to her showmanship, incredible voice and pop sensibility the musical genius of long-time collaborator Richard Barratt aka Crooked Man / DJ Parrot and you end up with an irresistible mix of shimmering disco strut, pulsating synths and thumping club beats.

‘Róisín Machine’ seems like the culmination of and logical conclusion to Murphy's 25-year career - from her time as one half of Moloko through to collaborations with the likes of Boris Dlugosch, Maurice Fulton and Crooked Man - but at the same time feels new and exciting and oozes with confidence, as if Murphy is only just getting started. “I feel my story is still untold, but I'll make my own happy ending...” are the revealing opening words of the album which has been a decade in the making.

Even though every song on the record is a standalone winner that would feel at home on most dancefloors, the album also works extremely well as a whole, with one track seamlessly blending into the next. It therefore equally lends itself to an afternoon on the sofa - headphones on, choice of drink in hand and dreaming of a time when we can finally hear it blasting through the speakers of our favourite clubs. Luckily, there is a wealth of lockdown video content by Murphy herself that will keep us entertained until then!

Róisín MurphyTake Her Up To Monto