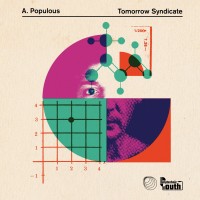 Two fabulous tracks recorded pre lockdown, but which act now, say the band “as a perfect soundtrack to these surreal times”. Both tracks unique to this stand alone release, as the band knuckle down on recording the next full length.

A side “Populous” has already attained 6music radio play and the bands’ self made video has been given video of the week thumbs up on 2 online blogs- and merges perfectly with sleeve art created once again by the always great Nick Taylor. A fabulous synth pop track, totally befitting the current climate.

The instrumental flip “Living in a Simulation”, brings to mind a long lost La Dusseldorf demo given a modern reworking- punchy, kraut infused synth pop acting as a perfect foil to it’s flip. Lovely stuff once again and like everything by artist and label; expected to sell out swiftly upon release. Pressing of 300 on vinyl only.

Barry says: It's a rare thing indeed that PY put out a record i'm not completely enamoured with, and that slims down to 'absolutely unheard of' when it's Tomorrow Syndicate's new release. This double A side shows all of the kosmische power of these top-tier synthesists, and is further evidence to their supreme skills. THAT VIDEO TOO! So good.