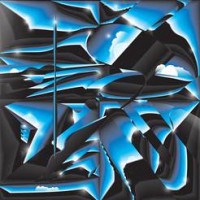 Witness the ever-changing, ever-mutating threat that is reality. Perception is under duress; sensibility is bending everyday under the barrage of nonsense. One must make note of whom one is and what one has become: look into the mirror of the planet-killers—psychic cannibals infiltrate and contaminate once familiar and seemingly secure territories… formidable foes indeed! What powers these beasts? What fuels discord and hatred? The behemoth of a “civil” society? What are the weapons at one’s disposal? Generosity is the aegis against greed, empathy is the armor to deflect apathy, love is the club to abate hate…the fog is lifting and humans are opening their eyes.

And so Castle Face offers this field recording, the Osees Protean Threat, from the pits as a quick booster between protein pills and recycled sweat beverage anthems to assist the listener to not worship at the altar of violence and greed, to not offer oneself up for free, to stand up and be vigilant! Truth will not be found in the speeches and photo ops of the overlords— stand strong and together under the gaze of the oppressors. Stand vigilant, united with those who don’t have the same privileges. Demand respect and a peaceful life for all. This recording is at the apogee of scuzz—punk anthem amulets for the ears and heart, a battery for one’s core. Be strong. Be human. Be love.