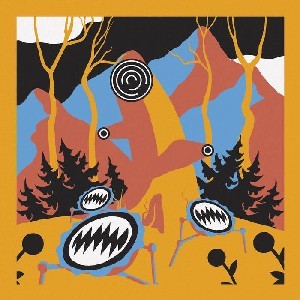 The Menace Of Mechanical Music is the expansive, genre-lurching debut album from TEAM PICTURE. Available here as a limited edition, indie only ecomix vinyl (limited to 150 copies), each record is completely unique, created using excess vinyl from pressing plants for a completely unique piece of wax. The record includes an 8 page art zine created by the band using assets from acclaimed illustrator Louis Byrne. Inspired by an early 20th century essay under the same name by American marching band leader John Philip Sousa, TEAM PICTURE dissect the automation of creativity.

Themes centre around the value of creative identity in an automated age, the increasingly disposable nature of art and where that leaves its creators. At twelve songs split into a three-part suite; The Menace of Mechanical Music is emphatically maximalist. Sousa’s vision was of a society that had deferred to automation, where babies were rocked to sleep by wheels and pulleys, and people no longer played piano with their own hands. Well over 100 years later and on the precipice of a technological shift never seen before, The Menace of Mechanical Music is the most human response that TEAM PICTURE could have given. FFO = The Cure, Kate Bush, Wild Beasts, The Cocteau Twins, Arcade Fire, Talking Heads, These New Puritans.