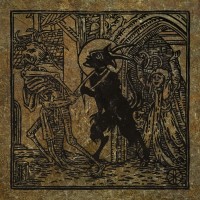 Delmer Darion is the West Midlands-born and North London-based experimental electronic/ IDM project of Tom Lenton and Oliver Jack, taking its name from the deep-sea diver found at the top of a charred tree after a forest fire in Paul Thomas Anderson’s cult film ‘Magnolia’. “There’s no reason behind it,” they say, “we just liked the absurdity of seeing a scuba diver in full gear at the top of a really tall tree.”

Their debut album ‘Morning Pageants’ has been five-years in the making: a sprawling, industrial ten-track account of the death of the devil as a tragedy for the imagination, inspired by a line in the Wallace Stevens poem ‘Esthétique du Mal’, due for release this October on Practise Music (Squid, Shards, William Doyle).

Archival accounts and true stories patter against Delmer Darion’s simulated journey in and out of hell. A monk is tasked to write down all the world’s knowledge in one night; a woman feigns her own demonic possession to cash in from a roadshow, exposed as a fraud only when unknowingly made to drink holy water, gagged by a piece of the True Cross; a violinist is refused a Catholic burial, suspected to be in leagues with the devil; a writer pretends to be possessed by the spirit of a poet, and produces volumes of work at her command.

A vast aural landscape is covered from the opening melodies coded in the constructed language of Solresol. Dissolved folk songs curtail the lo-fi edge of Gareth Williams & Mary Currie’s ‘Flaming Tunes’. At times it’s Yves Tumor being hit around the head with a disco ball, at others there’s an ambient and sinister warmth like the crackle of a burning piano. Decentered rhythmic assemblies of analogue drum machines play through a series of guitar pedals and thunderous bass swells from a self-oscillating filter feedback patch. Sequenced together, they’re shrouded in the same intricate noise of self-sampling and tape degradation.

The artwork for ‘Morning Pageants’ is a photograph of a print made by Oliver, based on a series of 16th Century works called ‘The Dance of Death’ by Hans Holbein, depicting different people being led away by Death. Recreating one of the prints, they replaced the figure being led away with an original drawing of Satan. The final artwork is printed on Nepalese Lokta paper, a waxy yellow paper that has been used for lots of sacred texts.