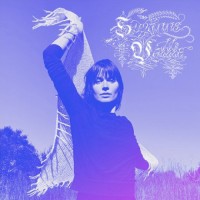 After a hard spell, heartbroken and drifting, Suzanne Vallie aimed to make a driving record rich with sympathy, high romance, and dedicated to the magic of good-timing. Other themes on the album include dogs, surfers, and the supernatural.

Vallie, a sorta-recluse living in rural Big Sur, California, is known for her improvisational performances where she freestyles lyrics and tells stories, both mythical and rowdy. She wrote the bulk of Love Lives Where Rules Die during the bummer summer after a breakup. It was a time when she drove up and down Highway 1 trying to blow out the speakers of her 94’ Honda. (bummer summer playlist).

The 11 songs of Love Lives Where Rules Die were largely live-tracked over five days. Suzanne Vallie and a core band of California col-laborators flew out to upstate New York during the last warm days of September 2019. Vallie and her producer, Rob Shelton, chose Dream-land Recording in Hurley, New York, for many reasons. The analog signal flow sounded embracing. The studio, a hundred-some-year-old church, had room for the whole crew to live-track. Some said a ghost might come around. What’s more, much of the band was already on tour out East, playing a run of shows with both Luke Temple and Meerna, double duty every night. They were plenty warmed-up.
Opening with “Ocean Cliff Drive”, Vallie sings of driving on the winding cliff side of Highway 1, blinded by fog and rain, all the same singing, “I can't see the road ahead of me, but I’m coming.”

The title track, "Love Lives Where Rules Die", begins with baritone guitar calling in a story of a broken heart among good company. With no way out in a three-day storm, Vallie asks friends to sing her love songs, and flies "on a wild light" with a “heart on borrowed wings.”

The party anthems, “Morro Bay” and “High With You”, celebrate friendship and the delicious urge for fun with Springsteen length lyric sheets. For Vallie, recording the sing-along "High With You" was also a “high” point in the making of Love Lives Where Rules Die. “It was midnight. We were real loose. Everybody got a tambourine!”