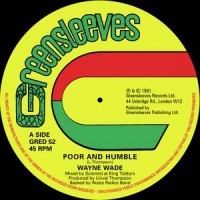 First time this Greensleeves 12” classic from 1981 has been repress. Two more roots anthems back to back on fresh wax. Both sides mixed by Scientist at King Tubby’s in a 12” murder style.A-side track, "Poor & Humble" (which would later become "Space Invaders Dub"). Flip side features underratted reggae vocalist Bunny Lie Lie who drops in on an extended version of "Babylonian". Produced by Linval Thompson and featuring the Roots Radics riddim section, both tracks are highly demand by dancers, DJs and collectors alike!

Matt says: Two absolutely huge cuts on Greensleeves that went onto become legendary dubs off the Scientist's "Space Invaders" album. The vocal cuts, backed by two of the tighest riddims every recorded by the Roots Radics are stupendously deep!