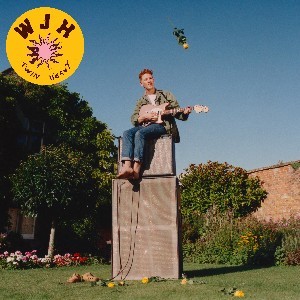 This Willie record is an especially happy moment for Yala! as it marks their first wholly independent release. Willie made one of the great debut bedroom records in ‘People And Their Dogs’, which they were huge fans of and felt very lucky in the wake of that to get a chance to work him, firstly on the follow EP ‘666 Kill’, and latterly on this album. It's a real privilege/responsibilityfor them to have their label associated with Willie's music and to put it out into the world, but something they’ve taken to with real fervour.

Twin Heavy was recorded in a couple of wildly productive weeks at Echo Zoo Studios in Eastbourne with producer Loren Humphries (Florence And The Machine, Last Shadow Puppets, Arctic Monkeys, Tame Impala). It was a hard collection to land on because Willie has a habit of writing a new song every week, almost always an evolution and improvement on the last. It’s not a bad problem to have but something as a label you have to be mindful of when contextualising a piece of his work. They eventually settled on a selection and the band recorded straight to tape. The life and simultaneous naivety and nous captured in this have really made them feel like they’re sitting on a special little secret ever since they first heard it.

Willie spent his teens with his ambitions set on a life as an amateur boxer but an introduction to the music of Neil Young set him on an accidental path of discovering he had a very natural ease with melody. As he told them, it suddenly felt like a better alternative than being punched in the head every day. Yala! have been really excited to see him grow over the last few months into an artist really capable of voicing his leftfield eccentricities alongside his very natural classic song writing. This final collection of songs feels to them like all the very best stuff from this last year of writing and recording...and, in their opinion and set against the chaos, a total relief to be in the company of.