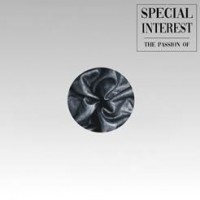 But would you bat an eye, waiting for war machines to pass you by? But aren’t we going out tonight? Aren’t we going out?"" Special Interest have returned with their sophomore LP. A dual release from Night School (UK) and Thrilling Living (US), The Passion Of... combines elements of glam rock and no wave pushed through a mangled filter of contemporary electronic forms. Special Interest present a precise and deranged vision of punk, an apocalyptic celebration, a step forward into a perverse and uncertain landscape. Recorded throughout 2019 with engineer James Whitten, The Passion Of finds the band with a fuller realization of their sound.

While their debut, Quintron-produced, album Spiraling documented a band discovering their purpose, The Passion Of… is both more chaotic and melodic, daring to finally live up to their notorious wall-of-sound live performances. Massive, juddering beats from an old Electribe sampler and distorted bass provide much of the rhythmic backbone. The effect is purely physical, circumnavigating the brain and heading straight to the body’s core, sounding at times like an Industrial take on the most brutal Gabber 12”s from the Groningen hardcore underground.

Crass, decolonized guitar work and haunting synth lines cut through the low end noise to serve the album’s layers of drama. It’s a cloying, intense dynamic that builds to almost unbearable fever pitch at points, threatening to overwhelm and overpower. Aided by mastering work by Rashad Becker, The Passion Of… is a true document of Special Interest as the intense and radical unit they are. Alli Logout’s razor sharp lyrics drip with the collective lust for life in the midst of painful truths. Offering moments of clarity and hope in their signature bratty maladjusted manner, switching from high camp satire to insightful political imperatives often within the course of one song.

The Passion Of... takes you on an odyssey, from celebrating the highs and lows of hedonism (Disco III), to dystopian anthems (All Tomorrow’s Carry) and disillusioned love songs (Street Pulse Beat). Ending in a powerful final decree (With Love) offering visions and desires for futures to come. The Passion Of... is a culmination of Special Interest’s long standing obsessions. Not just bearing witness but living and moving towards our innate desire for rapture in an urgent and raw testimony of the here and now. "Beyond blood we fight towards liberation"