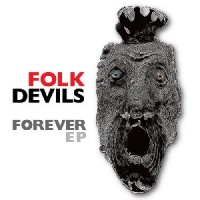 The 3-track “Forever” E.P. on Transluscent Red 10” Vinyl is limited to 250 copies and features two new compositions, the title track “Forever” and “My Slum Soul”, plus an incendiary new version of an old live favourite “Ink Runs Dry”. FOLK DEVILS, the London group that took their name from a well-known academic text on social scapegoating, and who blazed a trail across the UK’s independent music scene of the mid-80s with their unique brand of post-punk energy, have returned with their first new music in 35 years.

Recorded at London’s famous Konk Studios in North London and mixed and co- produced by Grammy Award-winning engineer Rik Simpson, the re-born Folk Devils drew inspiration from the release of their 2016 career retrospective “Beautiful Monsters” and the reactions at subsequent live shows around the UK with kindred spirits Membranes, Inca Babies and The Cravats. Founder members, guitarist Kris Jozajtis and bassist Mark Whiteley, reformed the group by recruiting members of a short-lived 1987 version of Folk Devils; guitarist Nick Clift and drummer John Hamilton. Together with singer Dave Hodgson they soon discovered they had created a well-oiled twin-guitar juggernaut that brimmed with the same restless, twisted blues that characterized the first and second iterations of the band from 1983-87 when they were fronted by the highly underrated and now sadlydeparted singer/songwriter Ian Lowery.

Hodgson, a fellow transplant from the North-East, had known Lowery in the early 80s prior to Folk Devils, when the two were in their respective post-punk bands Ski Patrol and Parting Shots. On the re-recording of “Ink Runs Dry” Kris Jozajtis notes...”It’s a classic Folk Devils song with a brilliant lyric by Ian. So it’s an acknowledgment of the debt we owe him, a nod of respect to one of the great unsung talents of rock’n’roll. It always felt like a ‘BIG’ tune to us; Yet despite there being two pretty decent radio session versions of it available, there’s always been a sense of unfinished business because “Ink” had never received the full studio treatment the song deserved.

I think the new, turbo-charged twin guitar version puts that right.” ”the songs will hopefully still speak to malcontents like ourselves, who are both fascinated and appalled by what we might encapsulate as ‘the human condition’. The dark humour and mordant wit that characterized Lowery’s lyrics is still intact I think, and despite the inevitable encroachments of age we haven’t really lost the dissatisfaction and anger that we tried to articulate in words and music back in the ‘80s. So we’re likely to continue making a mighty and righteous racket, both live and on record, as long as anyone cares to listen.”