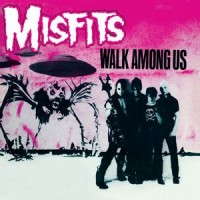 The legacy of Misfits is undeniable, having transcended punk into popular culture. 'Walk Among Us' is the important debut album which set the stage for a generation of artists. Highly collectible and sought-after, the official Earache reissue is licensed from Warner Music and the audio is taken from the original master tapes – unlike previous releases.

Upon its original release in 1982, Pitchfork rated the album 9.4 out of 10 and said: “Insidiously catchy, the album is a work of feverish imagination, but it’s in no way escapist. Danzig sings of butchering people and keeping the body parts even as the names Ted Bundy and John Watne Gacy sent chills down the spine of a nation. Neither glorifying or condemning, Misfits simply distilled the anxieties of the early 80s into a putrid elixir.”