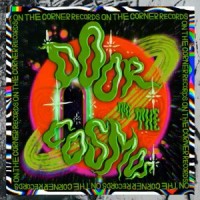 On the Corner Records was awarded ‘Label of the Year’ at the Worldwide Awards 2018. OtC is a story of artists and scenes that goes way beyond being a record label. DJ and label owner Pete On the Corner has created a home for innovative, bordercrossing, genre-pushing artists. The OtC vision is to bring music to the world that is knocking at the ‘Door To The Cosmos’. The label is an inimitable mixture of Miles Davis ‘call it what you want’ attitude, Sun Ra’s Afro Futurism and the ecstatic soul lifting influence of black music on electronic dance music.

On ‘Door To The Cosmos – Dancefloor Sampler’ Pete has curated a volume of cuts from present and future label family. This first in the series, is not just knocking at the door but giving it a kick! It’s club music referencing the source, be it Detroit, or UK bass culture combined with future sounds rising from cosmopolitan hotbeds of sonic heat. On this maxi EP Venezuela meets India via New York, the street sound of Dar Es Salaam, Tanzania pulses through UK Jungle. Undergrounds pushing the dance, breaking borders and genre alike. Rhythms from the ancestors channelled for future times.

Opener Dengue Dengue Dengue ‘Yodeller’ is finally on wax having been a rare as hens teeth dubplate. From psychedelic cumbia to dub, salsa to footwork, tribal to techno, The Tropical duo from Perú explore analog and digital rhythms, to create their unique sound. New label family, The Diabolical Liberties are stalwart scenesters Alex Patchwork and Earl Zinger. ‘River of Sound’ tears through the jungle so jump in for a swim. Uffe is also making his OtC debut. He’s been firing out killer tracks on Oye, Berlin. Pete OtC chasing him down as he was Prolifically dropping jazzed-up and gnarly house after returning to his native Denmark. Black Classical is back after a regenerative hiatus: the mysterious web otherlings reputation underpinned by his 12 hour ‘spiritual jazz’ mix tape that has been living its own life online and across the radio waves over the last decade. ‘Medassi’ is an elixir of deep house. On the flip, another fresh-faced recruit to the OtC family. Familiar to Shine’s network from Clive’s recent debut release, ‘Moon Buggy’ makes it clear he wasn’t only paying attention to OtC’s numbers. MC Palakata aka Mosam is a dancer with a Singeli flow, from the streets of Dar Es Salaam. During an OtC recording session at Nafasi Studio in Dar, Tom Blip worked with Palakata and created this heat. Set alight with Swahili, ‘Singeli Jungles’ is wild. Following on from Planet Battagon’s sold-out debut EP of ‘driod jazz’, the Admiral has sent this hard- swinging, future thumper to OtC. Tugg Luke Endeavour kicks it to the cosmic dancefloor. ‘Mudras’ by Sunken Cages remixed here by New Yorks MPeach, brings more, new OtC family straight to wax. The remix adds ‘Latinx del Futuro, where hi-energy dance meets low-end bass, adding a lilt of the rhythms from her native Venezuela.