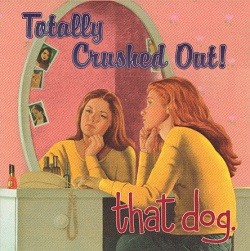 Conceived as a loosely-based concept album around the idea of crushes and young love, that dog’s sophomore album Totally Crushed Out! is a touchstone underrated classic in line with of-the-era releases like the Breeders Last Splash and Liz Phair’s Exile in Guyville. From the Sweet Valley High reminiscent illustrated album cover, to the A minus rating given by the dean Robert Christgau, to the Jenni Konner songwriting credit (long before she was the showrunner for HBO’s Girls) this album is quirky, smart, well-written and most of all...enjoyable.

That dog’s touring behind Totally Crushed Out! found them sharing stages with Foo Fighters, Weezer and Teenage Fanclub, their songs being covered live by Pearl Jam, collaborating with Beck, and the vid for “He’s Kissing Christian” achieving sub-Buzz Bin status on MTV. This 25th anniversary reissue marks the first EVER vinyl appearance for this album. Showing their attention to detail, Third Man Records sleuths got their hands on the original oil painting used for the front cover art and worked directly from that for all relevant artwork needs.