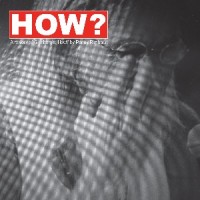 Co-founder of '70s/'80s anarchist punk band Crass, activist, poet, novelist, painter and philosopher Penny Rimbaud has recorded a live recital of ‘How?’, backed by jazz cellist Kate Shortt. ‘How? Is a reinterpretation of Allen Ginsberg’s classic 1954 poem ‘Howl’ wherein Penny, like Ginsberg before him, seeks to challenge the establishment and encapsulate the righteous anger and frustrations of a generation.

In January 2003, alongside a jazz quartet, Penny performed ‘Howl’ as his first gig at London’s Vortex Jazz Club. Ginsberg’s poem was chosen because it had been seminal in Penny’s development as a writer and because it seemed so well suited to a jazz setting. After the show, he was asked to do a repeat performance as part of that year’s London Jazz Festival. After happily agreeing, he reached out to the copyright holders expecting the process to be a mere formality, but it wasn’t. HarperCollins Inc is owned by News International, the militarist, industrialist, nationalist wing of media-magnate Rupert Murdoch.