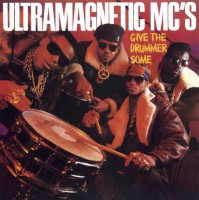 The late engineer and producer Paul C's fingerprints are all over this single from Ultramagnetic MC's, perhaps the defining release of their career. While earlier records gave notice of their strange and unique talents, they were loveably messy affairs. This, however, is the real deal, as polished as their early sound would ever be.

'Give the Drummer Some' grabs a fistful of different elements – from James Brown, Dee Felice Trio and James Brown – but bends them to its own purpose. This is a song with a momentum of its own and endlessly quotable lyrics. One of which, of course, was sampled by The Prodigy – huge hip-hop fans – for 'Smack My Bitch Up' in 1997. The now hugely rare 7" of 'Give the Drummer Some' edits this out to make it more radio-friendly, but this reissue reverses that cut, giving you the original lyrics. If anyone knows why Kool Keith also changes the word 'rappers' to 'monkeys' for that edit, answers on a postcard…

The brilliant B-side harks back to the time when every group had a song dedicated to their DJ. 'Moe Luv's Theme' sees Kool Keith at his most straightforward, singing the praises of the turntable skills of Moe Luv. It would be throwaway were it not for the effortless repurposing of Jackie Robinson's oft-sampled 'Pussyfooter'. That – and the presence of one of the world's great MC's at the height of his powers – elevates it far above a footnote.

Give The Drummer Some
Moe Luv’s Theme

Ultra Magnetic MC'sTravelling At The Speed Of Thought