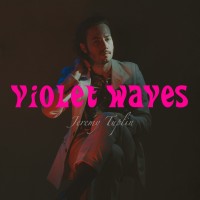 A transmitter receiving and broadcasting stories both mundane and intergalactic, ‘Violet Waves’ finds the Somerset-born artist boasting a diverse programming schedule few others could anchor. Previous record ‘The Pink Mirror’, a satirical look at our failure to remove the rose-tinted spectacles when observing the world around us, might have been an entirely solo affair, yet ‘Violet Waves’ finds Tuplin entwining his band, the Ultimate Power Assembly, in his cosmic spiral.

Exclusively recorded with the band who joined Tuplin on sojourns through Germany, Italy and two UK headline tours last year, their unfailing presence results in a more brash, bombastic output, espousing the electrifying drama of Scott Walker. Tuplin has always existed within touching distance of a wink of the eye, a tongue in the cheek, and even with the cataclysmic nature of the subjects on display here, Tuplin still manages to not take 2 life too seriously. ‘Killer Killer’ is a feel-good depiction of a love story featuring a porcupine and a chinchilla, the porcupine being the femme fatale and the chinchilla, the ladykiller. Whilst, ‘The Idiot’ finds Tuplin remarking, “The rebels have continued to try to make sense of it / A treason denounced as some kind of astro-physics bullshit” in a nonchalant tone perfectly suited to those who choose to eschew science when contemplating the planet’s future. Fittingly, Tuplin closes with a death wish. “I’ve been thinking and when I die, I would like my heart cut out and projected into outer space / And maybe it’ll catch on and others will do the same / The entirety of the human race / With their hearts cut out and floating in outer space”. Jeremy, we have lift off.