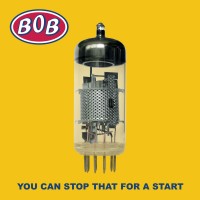 The album is accompanied by a selection of some of the band’s favourite demo recordings made between 1988 and 1994.

The long awaited and eagerly anticipated new album by BOB captures the band at their peak and includes some of their best material ever committed to vinyl and CD. A 12-track vinyl record is available in coloured and black vinyl and includes digital download of all 28 tracks contained on the double CD version. ‘You Can Stop That For A Start’ is an exclusive album of previously unheard material written and recorded by BOB over a five day period in 1992. The almost legendary archive of unreleased professional and demo recordings by BOB is a rich one, and this release showcases some of the band’s best work.

All the recordings in the set have been newly mixed by songwriters Simon Armstrong and Richard Blackborow, and come packaged in artwork conceived by the band and accompanied by period images and new sleeve notes.

Potted BOB History:
BOB’s initial line-up was Richard Blackborow (vocals, keyboards, guitar), Simon Armstrong (guitar, vocals).
Jem Morris (bass guitar), joined the duo in 1986 and, augmented with a drum machine, they recorded the band’s first release, a flexi disc, released in 1986 on their own House Of Teeth label, and containing three short songs: “Prune (Your Tree)”, “Groove” and “Brian Wilson’s Bed”. The band gave a copy to John Peel in a fortuitous encounter in the Rough Trade record shop, and he played it many times.
The drum machine was replaced by drummer Gary Connors in 1987, and this line-up recorded 1987’s What a Performance single and the first of three John Peel sessions. The band were now able to take to the UK’s motorway network in their newly acquired ‘vintage’ Transit van, and begin a series of tours that eventually saw them play hundreds of gigs the length of the country and beyond.

Early in 1988, Gary Connors was replaced by former Jamie Wednesday drummer Dean Leggett, and the band recorded their second single, Kirsty, a session for BBC Radio One’s Simon Mayo, and their second John Peel session. Both singles received heavy play by John Peel. The two singles were brought together with the earlier flexi disc as the compilation LP Swag Sack, which was their final release on the Sombrero label. All later records were on their own House Of Teeth label.

In 1989, the band released a single Convenience, which charted well in the NME and Melody Maker indie charts and, more importantly, reached no.31 in John Peel’s Festive Fifty at the end of the year. This was followed by a limited edition/fan club release containing three songs: “Esmerelda Brooklyn”, “I Don’t Know” and “Sink”. After their third and final John Peel session, Morris was replaced by ex-Caretaker Race bassist Stephen ‘Henry’ Hersom, and this final line-up recorded the Stride Up EP in 1990, an LP Leave The Straight Life Behind, the single Tired in 1991, and one last 12”, the Nothing For Something EP in 1992.
BOB became one of the victims of the demise of Rough Trade’s distribution arm, which limited sales of the album and forced the band to tour for an extended period to recoup the album’s costs. A feeling of disillusionment with the ‘business’ side of the music caused a drop in morale, and despite having produced a large body of unreleased work, they disbanded early in 1995.

In February 2014, “Leave the Straight Life Behind” was re-released by British independent label 3 Loop Music as a 2CD expanded edition which included the remastered album plus a bonus CD of all the John Peel and BBC sessions, as well as extra tracks.

In 2015, “The Singles and EPs” was released by 3 Loop Music as a 2CD compilation of remastered tracks from Swag Sack and all vinyl Sombrero and House of Teeth releases.

In 2019, the band announced six final concerts in England and Germany featuring Blackborow, Armstrong, and Leggett with newly recruited old friend Arthur Tapp on bass. A limited edition 7” of Convenience with an unreleased B-side from 1992 was released on Optic Nerve. The single reached number 18 on the official UK vinyl sales chart.

BOB on the new album You Can Stop That For A Start:
“The tracks that make up You Can Stop That For A Start were recorded over a five day period in our final years, as the hectic touring schedule that had kept us financially viable began to tail off. What funds the band could glean from occasional publishing deals were spent on studio time, with the hope of creating work that would eventually attract more substantial financial investment. As this never materialised, the songs have largely remained unheard since the early nineties.