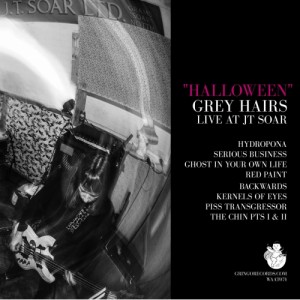 “Halloween” is a recording of a Grey Hairs live gig on October 31st 2019 at JT Soar in Nottingham. Gringo Records are releasing it on purple vinyl. It is limited to 300 copies and that’s it: no re-press, no deluxe edition. Grey Hairs guitarist Chris Summerlin takes up the story: “When the idea of recording a live album was put forward, our film-maker friend David Lilley suggested he film a song too. He wanted to experiment with using as many cameras and vantage points as possible and that’s exactly what he did here – cameras on heads, cameras on guitars, cameras on cameras. We hope you like it as much as we do.

People occasionally tell us we’re a “good live band”. I’ve never been sure – some bands we’ve been in have always been fairly predictable in their quality, always able to do a good show but this one is different and elusive somehow. You just can’t tell how something is going to go, even when you’re in the middle of it. So, in the name of balance and trust, before I tell you to buy this live record, I’m going to first tell you about the 3 worst Grey Hairs gigs to date, in no particular order.

Which brings me neatly back to plugging this record to you. We’ve resisted the temptation to do a live album because we always felt this unpredictability was both our secret strength and our clear weakness. We could never guarantee any live record would capture us at our best and maybe putting us under the microscope would just be upsetting. I’m pleased we were convinced otherwise, the record captures the good and the bad of what we do perfectly, maybe even more so than the studio albums. We really hope you like it. Maybe we *are* a “good live band” after all?”