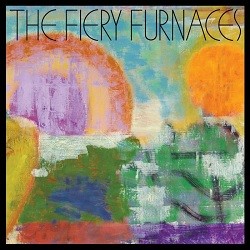 "This is the first new music from The Fiery Furnaces in ten years," the band says. "The songs were recorded in New York City and a few hours north of New York City on February 3 and February 10 - 12, 2020. 'Down by the So and So on Somewhere' is a regretful song about having regrets. Now it seems even more sad than we thought it was back then: 'Will you meet me,' etc. Matthew was happy to use a Soviet drum machine. Eleanor was happy to play real drums. 'The Fortune Teller's Revenge' is another sad song. We cut out the lines from the first and third verse: 'with me; just kidding' and 'leave everything to me.' Matthew likes hearing Eleanor sing 'I'm sorry to say I've never made a mistake.' Eleanor likes that you can't quite tell who's singing what, when."

Eleanor and Matthew Friedberger formed The Fiery Furnaces in New York City in 2000. Their debut album Gallowsbird’s Bark (Rough Trade Records) was released to critical acclaim in 2003. In the following seven years, they released eight more albums and toured extensively throughout North America, Europe, Australia and Japan. The band’s last performance was nearly a decade ago at the Primavera Sound Festival in Barcelona.In the meantime, Eleanor and Matthew have released eight solo albums, collectively. They are very pleased to return to the stage in their hometown Chicago, at Pitchfork Music Festival.

Eleanor: Someone comes up to me at every show and asks: “How’s Matt? What’s happening with The Fiery Furnaces?” And I say, “He’s fine” and “Nothing at the moment.” I’m so happy to finally have some news: “He’s fine” and “We’re playing in July at the Pitchfork Festival.” We didn’t break up; this isn’t a reunion. We’re just playing the next show.

Matthew: For the last three and a quarter years I’ve been listening to Fiery Furnaces records every day. I think I finally get it.