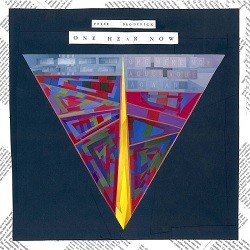 This is one 35-minute piece in 11 parts, commissioned to accompany a series of murals by the brilliant Brian O'Doherty. The original art exhibition was called One Here Now: The Ogham Cycle, so I decided to call my piece ONE HEAR NOW.

This music was composed in a very systematic way, by turning the murals into a score, assigning different notes to different colors, different instruments to different shapes, etc. It was written so that it could be performed solo with the help of a loop pedal, but for this recorded version there were no loops used. All parts were performed fully through. There's also no artificial reverb on this recording. A microphone was placed in the middle of the gallery with the paintings, and the instruments were recorded at varying distances from the mic, allowing the natural reverberation of the room to be captured.

Barry says: In what must be a record, the second of Peter Broderick's albums to hit the (virtual) shelves this week couldn't be any different. Violin and piano brought together to accompany a series of murals by Brian O'Doherty. Beautiful stark, sometimes hopeful modern classical.