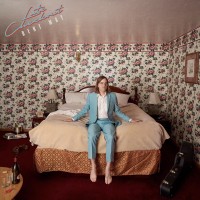 “Full speed ahead now, no more looking back.” Dent May confidently croons on his fifth LP, Late Checkout. The un-nostalgic sentiment and sobering clarity of May’s latest body of work signifies the 35-year-old songwriter from Mississippi taking a reflective rest-stop on the winding road of his now decade-long career.

After relocating to Los Angeles in 2015, touring his last record Across the Multiverse around the world, and building his own Honeymoon Suite Recording Studio with friends Pat Jones and Michael Rosen, May suddenly found himself with the chance to take his time making a record. Through the dozen thematically-linked tracks on Late Checkout, May grapples with the swinging emotions of our contemporary reality with a rare optimism and distinguished sound.

Bearing the torch of classic American songwriters that have inspired him like Harry Nilsson, Carole King, and Randy Newman, May has gingerly cultivated his iPhone note scribbles and subconscious melodies into songs that could stand the test of time. Leaving the comfort of home-recording, May set out to elevate the production quality on Late Checkout while maintaining some intimacy through sparse arrangements. After writing and performing parts for a bulk of the instruments on the album, May filled out his orchestrations by inviting string players, a horn section, background vocalists, and a pair of auxiliary drummers to play on the album. Contrary to the instant gratification permitted by modern home-recording, May made a conscious decision to slow down and pay careful attention to his songwriting on this album. He began to savor the minutiae of his daily life spent wandering around LA, not getting invited to hang with friends, and waking up in hotel rooms after DJing weddings. May drew on these moments in his lyrics and began assembling ballads at his new studio, mimicking the bittersweet tone and consistent work ethic of Motown.

“I’ve been collecting stationery from almost every hotel I’ve stayed at for the past ten years.” May reveals about the album’s opener “Hotel Stationary.” “I’ve always been drawn to the nature of hotels. I think it relates to this sense of always feeling out of place and my constant wanderlust.” On Late Checkout’s first single, “I Could Use A Miracle,” May sings about the desperation of feeling down-and-out against a lush and upbeat pop instrumental. The groovy “Easier Said Than Done” is decorated with bright keys and syncopated drums while May sings about coming to the end of his journey to find love. “Sea Salt & Caramel,” spilled out of May as a saccharine love song to his girlfriend, adding pure sweetness to balance the record’s melancholy pallet. From beginning to end, May bares his soul on each track across Late Checkout, offering a reluctant goodbye to his former selves, before wandering home.

1 Hotel Stationery
2 I Could Use A Miracle
3 Didn't Get The Invite
4 Sea Salt & Caramel
5 Bungalow Heaven
6 Bless Your Heart
7. Full Speed Ahead
8 Easier Said Than Done
9 L.A. River
10 Imagination
11 Pour Another Round
12 Late Checkout