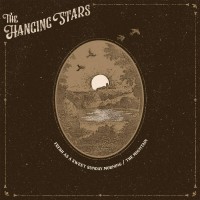 Also recorded at Famous Times for a never-released Bert Jansch tribute album, Fresh as a Sweet Sunday Morning sees the band cover the opening track from Bert’s 1974 album L.A Turnaround – an album hailed at the time for combining Americana with a playful English wistfulness. The Hanging Stars imbue Jansch’s song with a mean energy and their own signature cosmic psychedelia. The song ends with Joe Harvey-Whyte’s pedal steel sounding closer to a sitar whilst droning and distorted guitars seem to almost collapse in on themselves during a coda that sounds like it cannot bear to stop itself.

The Mountain sees the band enter entirely different territory. Bookended by Sam Ferman’s angular bass line and Paulie Cobra’s relentless drumming, what comes between recalls both the darkest sounds of The Doors and the ethereal psychedelia of early Verve, with Luke Barlow’s flute puncturing a haze of distorted guitars.

The Hanging Stars released their debut album Over the Silvery Lake in 2016, which received plaudits from broadsheets such as The Times, who described it as; "An album with enough of a hazy, sun-dappled charm to make the capital's dreariest weather bearable”, as well as The Guardian, who said; “Mersey-laced harmonies and just a whiff of the Gun Club.” They picked up a good amount of support at 6 Music and “The House on the Hill” scored a much-coveted 10/10 by John Robb on Steve Lamacq’s Roundtable.

A. Fresh As A Sweet Sunday Morning
AA. The Mountain