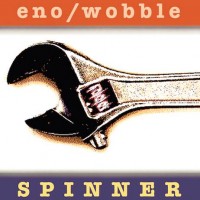 Spinner was another coming together with a musician who had carved out a hefty reputation as a solo musician after starting out playing in an iconic band, in this case former Public Image Limited bass player Jah Wobble. Starting life as the soundtrack to Derek Jarman’s Glitterbug, Eno passed stereo mixes of the film cues to Wobble who embellished and built upon them to construct the Spinner tracks, drafting in Jaki Liebezeit of Can to play drums on some tracks. The resulting fusion combines icy ambience with a kind of psychogeographical funk.

“Stravinsky” Is An Original Brian Eno Track From The Derek Jarman Glitterbug Soundtrack. “Lockdown” Is A New And Exclusive Track By Jah Wobble

Track 11 Is An Original Brian Eno Track From The Derek Jarman Glitterbug Soundtrack. Track 12 Is A New And Exclusive Track By Jah Wobble.