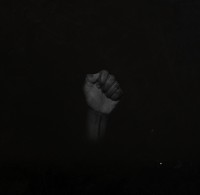 Sault make a stunning return after placing pretty much the whole world into a frenzy following their two mysterious and incredible debut LPs “5” and “7”.

Still shrouded in secrecy as to its members, what we do know now is that it’s produced by Inflo, the London producer who has so far worked with Michael Kiwanuka and Little Simz.

“UNTITLED (Black Is)” arrives as an expansive double LP, affording longer track lengths and a greater diversity of tracks than their quick-fired debuts. Characterized by an honest and soulful production aesthetic throughout, the previous melting pot of gospel, Afro and funk soul influences are reassuringly present; while lyrically the album contains a much more serious and urgent message about the current state of modern society. Touching on systemic racism, injustice and police brutality, whilst celebrating triumphantly in its own self, it’s a hard hitting and at times stark revelation set to a backdrop of effortlessly suave instrumentals that pour off the record with an abundance of style and confidence.

There’s a reason Sault are so eagerly championed in the hypesphere right now: they’re unashamedly proud, unreserved and informed. Their musical message and sentiment is real; and by so far escaping any proper identification this has only added to the poignancy and impact that “UNTITLED (Black Is)” is likely to have over the next few months…

Matt says: Following up the jaw-dropping impact of ‘5’ and ‘7’ was never gonna cause the biggest band in the hype-mosphere any issues. You get the impression that the (frustratingly still anonymous) collective have musical ideas and modern philosophy pouring out of their backsides, drip feeding us genius and revolutionary sentiment as and when they deem us ready. Gifting the 6Music demographic with an empowered, self-assured and identity-defining document wrapped in a mellifluous tapestry of Afro, gospel and soul-indebted influences; the pure, transparent production style only serves to juxtapose the often hard-hitting lyrical content against this rich musical backdrop brilliantly. Sault highlight disparities, discrimination and disadvantage in Black society in much the same way as Gil Scott-Heron or Kendrick Lamar. Amongst the vitriol however, is an album of uplifting, tender and intimate moments, immediately reflective of our current times, especially poignant for 2020, and seeking to create a brighter future for everyone.