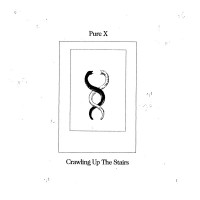 Crawling Up The Stairs is the sophomore album from Austin underground luminaries Pure X, re-issued on 180 gram vinyl by Fire Talk.

The anticipated follow-up to debut ‘Pleasure,’ the new record places Nate Grace’s ragged vocals upfront in the mix with more clearcut, refined production choices, while still imbued with the jagged sexual tension and undercurrent of catastrophe that has won them fans across the world.

More accolades from the press followed, notably Pitchfork calling the record ‘sophisticated and self aware,’ lending a further upward trajectory to the band’s steadfast cult status. The duality of vocals from Grace and Jenkins for the first time evoke an even more enthralling immediacy to Pure X’s continued evolution of their nightmarish visions, a spellbinding combination that will find appeal in old fans and new listeners alike.

Pure XCrawling Up The Stairs