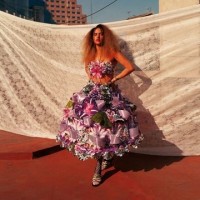 Under the name Empress Of, Honduran-American songwriter, musician and producer Lorely Rodriguez creates introspective, self-empowering pop music centered around her impressive, acrobatic vocals. On her 2015 debut album, Me, she established a danceable, spontaneous sound that embraced whimsicality and percussiveness. With her 2018 sophomore album, Us, Rodriguez wanted to facilitate a more equal exchange of energy between herself and her listeners, to create a community. Now she's gearing up to release her third album - I'm Your Empress Of comes on the heels of touring with Lizzo, Blood Orange, Maggie Rogers and Mura Masa and follows her collaborations with Khalid, MÃ˜, DJDS and her song "Wild Girl" with KITO. Lorely shares, "After writing three albums, no process has been the same. This record wasn't written in a remote location. It wasn't written in a collaborative effort. It was written in my small studio in Highland Park, Los Angeles over two months in between touring the world. Music is magic. Something that possesses me, shows me things about myself that aren't easy to see. It's called I'm Your Empress Of because I've always felt that once a song is done, and the emotion is there and it's not inside me anymore, it belongs to the world."

The VaccinesCome Of Age - Deluxe Edition