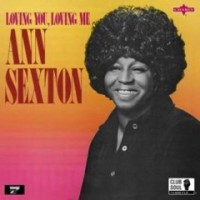 Mary Ann Sexton was born in Greenville, South Carolina, 5th February 1950 and is sadly one of the most overlooked female southern soul singers.

She launched herself onto the secular soul scene at the dawn of the seventies as ‘Ann Sexton and the Masters Of Soul’ alongside her husband, saxophonist Melvin Burton.

Her debut disc “You’ve Been Gone Too Long” (a Northern Soul masterpiece) was originally released on the local ‘Impel’ label before catching the ear of Nashville DJ/Producer John Richbourg who signed her to his ‘Seventy 7’ imprint. Her debut album ‘Loving You, Loving Me’ followed in 1973 featuring the single plus club favourite “I Still Love You” and the funky hit “You’re Gonna Miss Me”, Billboard R&B #47.

Before the decade was out Ann had turned her back on the music business in favour of a career in academia. In 2003 her self-penned song “You’re Losing Me” (also featured her) appeared on the soundtrack to the hit movie ‘21 Grams’ reigniting her long-lost passion. In recent times she has appeared at several UK and European events wowing audiences with her unique talent.

You’re Letting Me Down
You’ve Been Gone Too Long
Come Back Home ( I Know I Did You Wrong )
I Still Love You
Have A Little Mercy
It’s All Over But The Shouting
You’re Gonna Miss Me
You’re Losing Me / Love, Love, Love
Keep On Holding On
Let’s Huddle Up And Cuddle Up
Lovin’ You, Lovin’ Me
You Can’t Win
If I Work My Thing On You