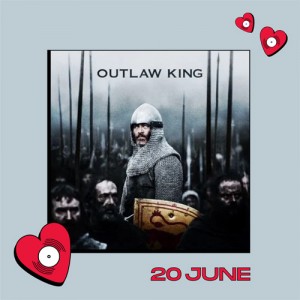 OUTLAW KING is the soundtrack album from the intense Netflix medieval action drama ‘Outlaw King’, composed and performed by Grey Dogs with a host of Scotland’s musical talent.

Grey Dogs is acclaimed producer Tony Doogan (Belle and Sebastian, Mogwai) and the film’s director David Mackenzie (Hell or High Water, Starred Up). Mixing simple beautiful period music with moody atmospheres, plaintive soundscapes and high intensity action score, this is a journey through the misty glens, dark castles and bloody battlefields of Robert The Bruce’s Scotland (whom the film is based on) which somehow sounds both ancient and modern.

Grey Dogs is an umbrella collective designed to pull in diverse talent for making film soundtracks and other sonic landscape work. Tony Doogan and David Mackenzie are the core and a variety of top musicians come in and out including violinist Greg Lawson (Grit Orchestra) Barry Burns (Mogwai), the Scottish Session Orchestra and sax genius Raymond MacDonald.

For the end of the film, Tony and David decided to work with the wonderful Kathryn Joseph for her contemporary take on two folk classics - the tragic Land O’ The Leal and the rousing Scots Wha Hae (about Robert the Bruce and his army on the morning of the Battle of Bannockburn).