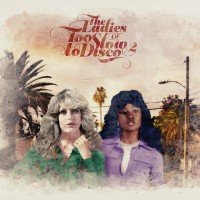 On Volume 2 of The Ladies of Too Slow to Disco, DJ Supermarkt has brought together 16 compelling tunes and hidden gems from 1974-82 that tell a deeper, more political story, while taking the suave sounds you love into new territory: soul, gospel and jazz. The songs on this compilation are from women who were taking control of their own careers, making an independent stance in the some of the most trying years for women in the history of the recording industry. In an effort to tell the often untold, yet deeply influential, stories of this delicious period of music, Volume 2 highlights songs from players who broke through the machismo that sat upon the glass ceiling before them to create classics.

As with every TSTD release, you will uncover lost classics and should-have-been-hits into the overdue limelight. You’ll find confessional funk and sultry disco, 5th Avenue flounce and soulful midnight aching. You will discover artists here who were movers and shakers from the 1970s Women’s Music movement, artists determined to fashion a music industry that worked for them. You’re in the company of musical royalty. The Ladies of Too Slow to Disco 2 brings you the smartest writers and singers, Grammy winners and unforgettable performers, all at the peak of their powers.

Patrick says: Presumably adorned in linen trousers and an apricot scarf, DJ Supermarket delivers another essential set of deep yachters and enticing AOR from an all female cast. If you need any more persuading, head straight for that Marti Caine track and thank me later…