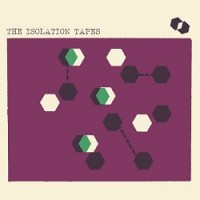 Castles in Space brings you a stunning collection of new music recorded in isolation during the COVID19 On April 3rd 2020, two weeks into the UK's total coronavirus lockdown and in an attempt to find something positive as a break from ping-ponging between high anxiety and frustrated bemusement, I sent out the call for submissions for a new compilation of music, which had some clear stipulations: the music must be new and recorded between 23rd March and 17th April.

The results were positively overwhelming and surpassed anything that I could have hoped for. I thought that I might be tapping into something as conversations with musicians I know and work with were indicating that the enforced period of downtime was proving to be extremely productive. Albums were being finished. Ideas exchanged over Zoom conversations were being laid down on hard drives around the world. There was, quite literally, something in the air.

By the end of the 2.5 week period the window for submissions was open, I had received somewhere in the region of 250 submissions. Pretty much all of them being of astonishing quality and accomplishment. While this was extremely heartwarming and satisfying, it also presented a real challenge in that the editing job was going to be massive and difficult. Further criteria were therefore set to assist the selection process.
1. As a general rule, anything too dark or dystopian was out. Quite a lot of submissions sampled politicians and there were several creeped out drone-a-thons. I quickly came to the decision that this release had to offer something uplifting for the listener. We had to find some light and positivity in the darkness. For me, the tracks that worked best offered a droll commentary on our unprecedented situation without being overwhelmed by it.
2. The works really did have to be conceived and completed between 23rd March and 17th April. That rule was enforced pretty hard. Anything that had been "finished" or had undergone a "final mix" during that time was deemed to not meet meet the criteria for submission. It was important for me to capture the moment in the reaction of the contributors. Hopefully this global lockdown situation will never happen again, so I was viewing this as a one time only opportunity to document something unique.
3. As the submissions rolled in via email, Twitter, Instagram and facebook, it quickly became apparent that the original idea of releasing one cassette volume was not going to be sufficient. There was simply too much good stuff coming in. The scope was therefore quickly expanded out to include a CD volume and a cassette with three sides. 'Side three' being a download only selection.

And so began the selection of around 60 tracks which went forward for mastering by Jez Butler. Jez did a fantastic job of carefully mastering everything to a consistent, steady level. Brightening and de-harshing where necessary. There than began the marathon weekend long session of sequencing what tracks were going to go where. Once a final selection and sequence was decided upon, Nick Taylor was engaged to do his usual superb job on the artwork.

The finished compilation offers more than 50 tracks across CD, cassette and digital download. The highlights are too many to list here, but a few things to note are perhaps:

• Triple BAFTA award winning soundtrack composer Kenny Inglis, recording here as Imperfect Stranger. His long CD opening track "Hymn To The Sun" captures the mood perfectly. It's three minute tension build is utterly irresistible.
• On "Lock-in", The Twelve Hour Foundation provide a percussion track for their Moogs constructed from beer cans and bottle tops. Their musique concrète credentials still gloriously intact.
• Teleman's Peter Cattermoul provides a slice of airy poolside grooviness in "New Targets".
• Concretism's Chris Sharp takes a break from recording the follow up to 2018's "For Concrete and Country" to deliver "New Town Shopping Centre", his first new track to get a full release in 18 months.
• Fellow New Yorkers The Listening Center and Salvatore Mercatante both sent a pair of intricately beautiful synth pieces. Both of them approaching a classic New York minimalism style.
• The UK North Western electronic cluster is amply represented with new tracks from Polypores, Field Lines Cartographer, Warrington Runcorn Development Co. and Guerilla Biscuits, whose "What Makes Us Human" is imbued with a spirit of sci-fci scratching.
• The Heartwood Institute's Jonathan Sharp and Panamint Manse both contribute beautiful works following their sellout collaborative LP which was released on Castles in Space earlier this year.
• Hawksmoor's exquisite Durutti Column-esque washes of "La Peste" are quite the thing to behold.
• We also have a few incognito contributors including one of The Divine Comedy and one of the UK's most loved DJs and our foremost tape magician working together in a new collaboration.
• North Portugal's Stellarays sent an absolutely delightful space pop song full of longing and mournfulness.
• The British Stereo Collective's Roy Budd inspired "Circle Of Isolation".
• And on and on...
The images submitted by the contributing artists add another dimension to the project and are available to see at castlesinspace.com

The Isolation Tapes project is sold in support of the magnificent Cavell Nurses' Trust. A wonderful organisation which helps nurses, midwives and healthcare assistants, both working and retired, when they’re suffering personal or financial hardship. This is often due to illness, disability, older age, domestic abuse and the impact of coronavirus.

It is sincerely hoped that you will find much to enjoy in The Isolation Tapes. It was both an absolute joy and an arduous headache to put together (in a good way). The final edit was extremely difficult and there is certainly enough stuff in the can for further releases if these volumes find some appreciation.