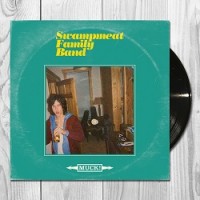 Punk Slime Recordings are proud to present the new full-length album from Birmingham, UK’s Swampmeat Family Band. Their new album Muck! is a massive step forward both songwriting and production-wise, offering up a blend of uptempo garage rock and gentle americana. Featuring members of PNKSLM’s own The Castillians and Terror Watts as well as Low Cut Connie, PWEI and Bentley Rhythm Ace, Swampmeat Family Band have already drawn praise from the likes of KEXP, The Line of Best Fit, DIY and GoldFlakePaint while turning heads with their live shows around Europe, and the band will be making their US debut at the SXSW festival in Austin, TX this year.

Amongst the new additions on Muck! are vocalist Joni Coyne as the group’s fifth member; she lends an extra dimension as she echoes lead vocalist Daniel Finnemore throughout throughout Muck. On top of that, horns form part of the palette for the first time on a Swampmeat record, as shown on the handsome instrumental ‘The Ballarat Ghost’ as well as perhaps the album’s most crucial track, the gorgeous ‘Mother’s Lies’, which represents the Swampmeat evolution in four-minute microcosm.