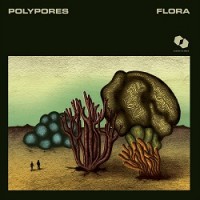 Polypores (AKA Stephen James Buckley) new work, “Flora" was written and recorded in the long, hot summer of 2018. Says Stephen “I didn't intend to write a record with a specific theme or sound, but, as is often the case, something eventually presented itself once I started playing around with my machines. I spent a lot of time walking in the woods and exploring some of the beautiful countryside around the North West of the UK. Whilst doing this I got a collection of field recordings, which ended up forming the compost from which the album grew. I'd have the recording playing in the background whilst writing, or running through loop pedals. I found that if I blended the field recordings in with my initial synth pieces, it added a whole new texture and depth to what was already there.

"It created a place in which the music lived. And that place was most definitely a forest. As I got deeper into the writing process a vague narrative formed. Entering a strange forest, where everything was unnaturally huge. Towering flowers and fungus. Both frightening and overwhelmingly beautiful. Then, emerging at the end through the canopy of trees into bright daylight. The last track, Sky Man, represents this I think. Like I say, it's a very loose narrative. I don't even feel like I wrote it myself - more that I channelled it from that strange ether out of which music comes.”

“Flora" is an astounding record. Electronic Sound Magazine reviewed the LP in issue 54, declaring that “Flora” '…is just as good as you would expect from this superb analogue synthesist. From the eerie grittiness of the title track to the bleepy, sombre wobbles of “Golden Mould”, “Flora” has a touch of science fiction enveloping it for a record "about flowers”. “Giants" could soundtrack the exploration of a distant, long abandoned alien planet, all ambient whines and echoing, stargazing synthesis…There’s a lot to enjoy here.'