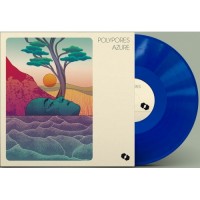 • British synthesist, Stephen James Buckley returns to Castle in Space for the release of a brand new Polypores record.
• Azure is a beautiful new age symphony of blissed out water music.
• It’s his first full length LP since the release of last year’s “Flora”, which is also reissued in a stunning new two coloured ”earthtones” edition.
• Flora was included in several end of year best of charts last year including Electronic Sound and Norman Records best of 2019.

Stephen explains the genesis of Azure:
“As with a lot of my music at the moment, the original inspiration from Azure started out with the music itself, rather than an initial concept. That is, it came through playing. I noticed that a lot of what I was writing seemed to lend itself to water imagery. It was flowing, fluid, bubbling. The album was written late 2019, when it seemed to be perpetually raining, so that might have been a factor.

I was also listening to a lot of new-age music at the time. Whilst I didn’t purposely set out to do a "new-age" album as such, I think a lot of that crept in there - but with it's own Polypores-esque twist. Rather than working in a specific genre, I much prefer to take elements and signifiers from a genre, and warp them into my own vision.

Once I'd decided to go down this route the writing became more focussed, and I was also able to immerse myself in various books, films, and documentaries related to the ocean, particularly the mythology and lore surrounding it. I imagined this to be the music that the sunken stone heads from Easter Island would have on their record players. A relaxation tape for dolphins.

The album was created with a modular synthesizer, which was still fairly new to me at the time. As with most of my music, it was a fairly quick process, as I tend to record live rather than overdubbing/multi-tracking. I find this way of writing more immediate, it gives me a more direct link to my creativity, without too much thought or analysis getting in the way. I used a lot of New-Age type sounds, and one of the tracks uses a Gamelan scale. I made heavy use of granular synthesis on the human voice, to create the choir sounds.
I think I did subconsciously want to create something similar to Flora. Not sonically (as it's a very different sound palette) but more the idea of it being an exaggerated, almost fantastical response to an environment. So whilst Flora takes place in the forest, Azure takes place in the ocean, but both focus on the fantasy elements, as opposed to the mundane or harsh reality. I wasn't going to do an album about overfishing or something. It's a form of escapism I suppose.

Some interesting facts about the album are:
- One of the tracks has a short sample from the soundtrack to a well known 1990s point-and-click adventure game, set deep in the Caribbean,
- I was listening to Rime Of The Ancient Mariner by Iron Maiden a lot around the time of writing.”
Castles in Space presents ”Azure” in a deluxe azure blue vinyl pressing in a full gloss varnished sleeve and foldback tabs. The LP includes a beautiful art print designed by the sleeve designer, Nick Taylor. French comic book legend Moebius was an inspiration for Nick along with taking direction from the luxurious flow of the music.