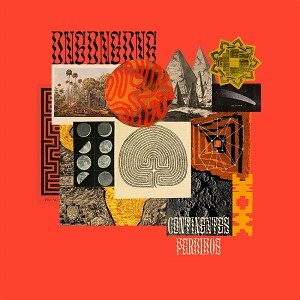 DNGDNGDNG is Dengue Dengue Dengue's new alias for this release of extra sensory perception. The duo have projected rhythmic visions of lost continents, unknown worlds and the unseeable past and future that is present all around us. By channeling rhythmic patterns from the matrix they're able to translate the waves of radiation around us which originated at the cosmic event which created the universe. DNGDNGDNG reach deep into their sonic imagination to draw from interlocking time signatures and variant tempos. From the cosmic interference and mathematics DNGDNGDNG create a polyrhythmic theme that brings the sound of continents lost and imagined to our ears. Dengue Dengue Dengue have established themselves as one of the most pioneering artists on the leftﬁeld electronic scene in recent years with heavyweight support by the likes of Boiler Room, Resident Advisor and Bandcamp weekly.

Heavily inﬂuenced by the sounds of UK bass sub-cultures Dengue Dengue Dengue are drawing on their decade of entrancing audiences around the world to connect to dances of the mythical past and lands of the dance beyond their alter ego Afro Peruvian invocations via ancient future rhythms. With the futurist alias of DNGDNGDNG the duo are able to break expectations and swing into imagined realities on a 6/8 rhythm.

Behind the masks are Felipe Salmon and Rafael Pereira, two producers, dj’s and graphic designers from Lima, Perú. Their work explores the rhythms from Peru and other parts of the world, recreating them electronically by mixing new and old, analog and digital, to create a unique sound and visuals. Their musical explorations go from psychedelic cumbia to dub, from salsa to footwork, from tribal to techno. Their visual and sound palette continues to grow and add new ﬂavours to this melting pot.