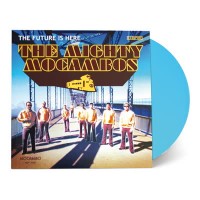 Original press release note from 2011:
After almost twenty 45s under various pseudonyms, their thrilling and hugely successful debut album with London-based singer Gizelle Smith and a tour with concerts throughout Europe, Germany's most prolific deep funk formation is ready to step further into the spotlight with their second longplayer.

Producer legend Kenny Dope (Masters at Work, Bucketheads) picked up the Mighty Mocambos's re-interpretation of the Furious Five classic "The Message" (released under a pseudonym on an obscure phantasy label without proper distribution), remixed it and re-released it on his own imprint Kay Dee Records. This album includes the original version of the "Next Message" – a message that apparently got heard and answered.

Afrika Bambaataa (the Godfather of Hip-Hop) and Charlie Funk (aka Afrika Islam, Grammy- and Oscar-decorated producer of Ice-T and original member of the Zulu Nation) loved the Mocambo vibe and joined the group on stage and in the studio to record "Zulu Walk" and "Battle", two stunning tracks of organic Funk that take Hip-Hop "back to the roots where we started out" (as featured MC King Kamonzi rightfully says) and along the way, leads funk into the future.

Keeping up with the universal spirit and ignoring boundaries of language in favour of the global groove, the Mocambos recorded "Physique", a rousing dancefloor smash sung in French by Caroline Lacaze. "The Sun Shines Tonight" is a cheerful party-in-the-studio session with original German funk and disco queen Su Kramer (who played with Donna Summer in the original cast of "Hair" during the late 1960s) that documents the pure joy of playing and spontaneity of a Mocambo live situation.

The 12 titles on this album showcase the group's collective determination, unified versatility and creative wit. From the drum-heavy, afro-tinged "Calling The Shots", the anthemic "Struggle & Triumph", the romantic melancholy of "French Vanilla Skies", the somber and frantic "Transcendental Express", to songs with an almost cinematic quality like the moody "A Brighter Darkness" and the horroresque "Paranormals Theme", the album offers a broad spectrum of colours, all held together by the unity of a band that has been playing together for years - recorded live in a few takes with simple analog equipment to capture the energy, chemistry and blind faith between dedicated musicians.