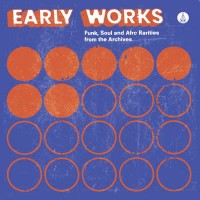 Since 2013 label founders and musicians Neil Innes & Pete Williams have been tirelessly fulfilling their shared dream of making the records they weren't hearing. Having spent years working in various bands both players felt the desire to break free of the constraints of working within another band and started on the slow path to creative autonomy by starting to work on the 12 tracks presented on this compilation.While deliberating their next steps they were approached by Here & Now records who licensed the 12 tracks and released them under the titleFunk, Soul & Afro Rarities: An Introduction To ATA Recordsin 2014 as a limited run of 300 copies that sold out within weeks of release.

Now in 2020, celebrating their 5th year of running successfully as a label in their own right, ATA are re-releasing these 12 tracks on a new vinyl pressing under the titleEarly Works: Funk, Soul & Afro Rarities From The Archivewith new artwork and liner notes that detail the labels birth.

The compilation features 12 tracks that include the very first 3 tracks from The Sorcerers that led to their self-titled debut LP & the first proper release on ATA, as well as the first recordings by The Mandatory Eight and The Yorkshire Film and Television Orchestr