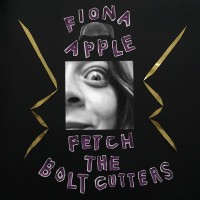 Fetch the Bolt Cutters is a strange and exceptional record, even within the context of an uncommon career. It shakes, rattles and rolls with unorthodox percussion, and on the opening track – I Want You to Love Me – the singer hiccups in ecstasy, facing off against an arpeggiating piano as though competing to climax first.

Although veteran engineer/producer Tchad Blake had some input, and Apple sought the assistance of her drummer’s father, sound engineer John Would, Fetch the Bolt Cutters marks the first time she has entirely overseen production on one of her albums. Knowing her own mind is a major theme. “I would beg to disagree, but begging disagrees with me,” she swaggers on Under the Table, a wickedly funny song about how she is a nightmare date at pompous dinner parties. (“Kick me under the table all you want.”)

Barry says: Toeing the line skilfully between mellow jazz, soulful r&b and good old-fashioned indie, Fiona Apple has a sound all of her own. Spoken word sections segue seamlessly into more driven rhythmic material before calming right back down into almost ambient instrumentation. Brilliant, and bonkers.