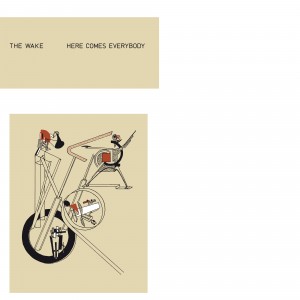 Factory Benelux presents a special 35th anniversary edition of Here Comes Everybody, the highly-regarded second album by Scottish group The Wake, originally released by Factory Records in 1985. Just 800 copies will be made available for Record Store Day on 18 April 2020, pressed in crystal clear vinyl with a bonus 7-inch single + digital copy.

Praise for Here Comes Everybody: “Holds up as a touchstone for aching, atmospheric synth-pop, all slinky guitars, crispy percussion, textured keyboards and limber bass" (Pitchfork); “The album stands as a pillar of moody synth pop, still bearing passing resemblance to New Order while retaining the bounce of the Postcard label bands and the cavernous production of Closer-era Joy Division, covering it all in some of the heaviest synth wash this side of Klaus Schulze" (Dusted)

Newly re-mastered for this special 35th anniversary edition, the original 8 track album is now augmented by companion singles Talk About the Past and Of the Matter, pressed on a bonus 7-inch single in a picture sleeve. Here Comes Everybody itself is pressed on clear vinyl, housed in a white reverse board sleeve with printed inner bag containing lyrics, images and liner notes by band members Carolyn Allen and Caesar.